There have been ongoing developments of import witihin the State Bar of Arizona regarding governance.

The Arizona Supreme Court issued its Administrative Order #2014-79, establishing a Task Force on the Review of the Role and Governance Structure of the State Bar of Arizona.  Recommendations may include replacing the current Board of Governors’ structure with a Board of Trustees, as well as revising particular governance mandates.  That task force has met several times, and anticipates its last meeting to be on June 23, 2015.  At the April 23rd meeting, discussion included getting the task force’s proposed Report to the community-at-large and to the legal community, in an effort to communicate its conclusions and recommendations.  The meetings are able to be attended by the public, and the materials are published at www.azcourts.gov

With the discussions about the unified Bar, funding, electronics, and so on, the year 2014 elections for the Board of Governors offered a full slate of nominees.  Ms. Weecks was happy to participate in the process and the discussion.  The below links and reproductions preserve some of the important questions that were posed during the election process.

For updates on important issues, check back in here periodically. 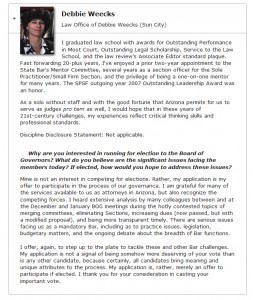